It always makes me laugh when students ask to see my Ferrari. At almost every school I’ve been in to, I get that same question. “What car do you drive?” They’ve done the maths. Played football. Published author. He must be minted. Imagine their horror, then, when they clap eyes on my 2001 Ford Fiesta, bought off a mate for £145. “Don’t worry” I tell the pupils. “It’s great in the winter. The heater is broken so it’s always on full blast. Bit of a problem in summer, mind”.

Still, they don’t seem too put off. They must still see value in my books. Well, that’s if the number of times I’ve been asked to sign a book ‘To eBay user’ is anything to go by. Little do they realise that the ones without my signature are probably worth more…

It wasn’t always this way. I finished my first manuscript at the age of 18. Bright eyed and relentlessly positive, I sent it off to tens of publishers. It was good. Not great, but good enough to provoke interest. Or so I thought. Every single publisher rejected it.

Several rewrites later, I managed to get the book into a position where a few publishers did finally show interest. One in particular caught my eye. Ian Ridley was an award winning journalist who had had several very successful books published. More recently he’d started his own publishing company, with his first project being Mark Halsey’s autobiography. I knew that the opportunity to learn from Ian would be invaluable.

I’m proud to say that Ian has gone on to become a true mentor to me. His support has been amazing and he helped make my first book, The Boy in Brazil, a success.

As far as I’m concerned it was a success, anyway. Those more critical could point to a number of factors. For starters, it took us nearly two years to pay back the cost of actually printing the book.

My deal with Ian was that he would take the risk – and it was a risk; I was a 22 year old kid and nobody had a clue who I was – on publishing my book. He’d edit it, pay for all the production costs, enter it for awards, take care of the marketing and pretty much be on hand 24/7 for advice. All I had to do was write the thing. Once the book royalties had paid back the costs associated with all of this then I’d begin to get paid, with profits split 50/50.

I never expected to make my millions, but I was hoping we might have recouped those costs a little quicker. Having been released just before the 2014 World Cup, Ian managed to get the book into most of the major newspapers, and we also made appearances on the BBC and TalkSport.

With all of the media coverage, I envisaged the book everywhere: plastered all over WH Smiths, on the front table in Waterstones, in the hands of commuters up and down the country. Yet when I strolled into my local Waterstones they’d never heard of it. “But I’m local”, I protested. “Can’t you support it?”
“Sorry”, came the reply. “You’re just not a big enough name.”

Well that was one way to bring me down to Earth with a bump. Fortunately there was still Amazon. Glorious, capitalist, tax-avoiding Amazon, where my book even troubled the top 1,000 bestsellers at one point. With the focus on online sales, we managed to shift 150 copies in the first month. Not bad, but still a long way short of paying off the costs of printing. Especially when we’d exhausted pretty much all media interest.

By month three, sales had fallen dramatically. The World Cup was over. There was a new season to look forward to, and a whole new series of books released. A profit had never looked further off.

Yet all was not lost. Though online sales were underwhelming, I was managing to sell a steady stream of books through friends, contacts and social media. It worked out much better to sell them myself than through other places. If we sold a book through Amazon for £10, Amazon would take £5 and Ian would take £5. If I sold a book myself, all £10 went to Ian. One personal sale was the equivalent of two online sales. If we ever entered a profit it meant I’d be getting £5 to keep from each personal sale.

Determined to at least break even, I tried everything I could think of to shift books. With Ian’s support I put on several book launches, spoke in schools, held signings, even set up a table at the side of a groundhoppers’ football event. If I sold just one book it was worth it.

We started to gather momentum. Reviews came in. Independent bookshops began to stock the book. Foyles ordered some in. Amazon made the eBook version an ‘Editor’s Pick’. And then, the ultimate recognition: the book was shortlisted for Football Book of the Year at the British Sport Book Awards. As far as I was concerned, we’d made it.

It took another year of hard work to break even. Four years on, we’ve even made a bit of a profit. Yet we’re still far from done. There are 700 copies of The Boy in Brazil in the spare room of my parents’ house. There are 150 copies under the bed in my flat. Until they’re all sold, I need to keep on putting in the legwork and thinking of new ways to get the book out there.

People often tell me they’re thinking of writing a book. My advice to them is always the same. Do it. It’s one of the most rewarding things I’ve ever done. Just make sure you’re willing to put in the work after the actual writing. And don’t expect to make your millions.

Check out the finished product: http://amzn.to/2yCSZ2l 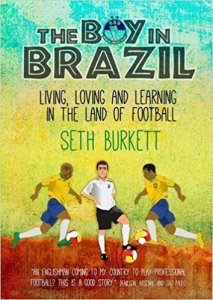 2 thoughts on “The Realities of Writing”