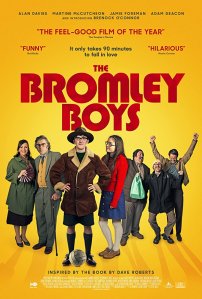 Last week I followed in the footsteps of Vinnie Jones by officially making the transition from football pitch to big screen. The Bromley Boys tells the story of one boy’s obsession with his local non-league side as they battle to stay in the Isthmian League. Based on the book by Dave Roberts, the film features an all star cast. There’s Martine McCutcheon, Alan Davies, Adam Deacon, Brenock O’Connor. And me.

It all started in the October of 2016. I was sitting at my desk, typing away at my computer, when the phone rang.

‘What are you doing tomorrow?’ came the voice on the other end of the line. It was William Sarne, a director of my old futsal team.

I imagine other castings are slightly tougher.

The directors needed someone who could kick a football in a straight line. They were due to film a match scene and it’d be my job to dribble round a few defenders and score a couple of goals. It seemed simple enough.

‘Why are they sorting this so late?’ I asked.

‘Séan Garnier was supposed to be doing the role but he’s injured’ came the response. So I’d be a direct replacement for the two-time world freestyle champion. Séan Garnier, with six million global followers, replaced by Seth Burkett, with one thousand global followers – most of whom he went to school with – and no acting qualifications.

Later that evening the phone went again. It was William.

‘Listen, they still want you in the film, but the role you’re supposed to be playing is West Ham’s Bermudan international striker Clyde Best. You don’t know anyone more suitable do you?’

Within an hour, one of my former teammates – Sean Sinclair – was confirmed. The role that was originally going to be played by Séan Garnier was now being split between three of us. Séan would still be appearing in the film – he was flying in from France the next morning – but he couldn’t do any of the football scenes. My former teammate would be doing the dribbling and scoring. And I’d be doing, well, I wasn’t sure what I’d be doing.

The next morning William picked me up at 6.30am. This gave us plenty of time to make the 8am casting call at Crockenhill FC in Kent.

If that wake-up call wasn’t enough of a warning, I soon found out that the life of an actor isn’t so glamorous.

After a lot of waiting around, I was called in to get my costume. For one day only, I was to be a West Ham reserve team player. I was given a claret and blue kit with blacked out Sondico boots. First, however, I was to get changed into a moth-eaten suit to film an entrance scene.

All suited up, I was sent to hair and make-up. The two ladies took one look at me and decided that they didn’t really need to do too much to make me look like I was from the 60s. I’ve never claimed to be at the cutting edge of fashion, but I had hoped my look might pass for something more modern. They didn’t even touch my hair.

By now it was approaching 10am. The stars were in their caravans and us extras were huddled together in the changing rooms, wondering when something was going to happen.

Eventually, those of us who were West Ham players were shepherded onto a bus. The task was simple. When the bus stopped we had to stand up, walk off and wait next to the bus door while the people with speaking parts said their bits.

If I wasn’t good at getting off a bus before, six takes and sixty minutes ensured that I’d pretty much nailed it by the time we moved on to the next scene: the run out.

I was assigned to lead my West Ham team out of the tunnel while keeping a ball in the air. In contrast, our overweight opponents would amble out to emphasise an obvious difference in footballing ability.

Once again, there were a load of takes, a load of different angles and a lot of waiting around for the cameras to reset.

At 2pm we broke for lunch. The stars took their shepherd’s pie back into their caravans while us extras huddled for space around the radiator in the cramped changing room. Despite our surroundings there was excitement in the air, for we all knew what was happening next: the goals.

With my former teammate now the star of the show, it was my task to provide him the pass. Inspired my Dimitri Payet’s slaloming goal the previous week, my team would roll the ball back to me from the kick-off. I’d take a touch and then hit a diag to my former teammate who’d then take on the whole team and score. He nailed it first time. And second time. And third time.

I watched on like a proud father, my own confidence growing with every pass. Then they asked me to score an overhead kick. After five underwhelming efforts they soon realised their mistake and instead focused on tap-ins and volleys. Happy that I’d had plenty of screen time, I took a backseat and let some of the others – who were actual actors and had actually auditioned – have a go. 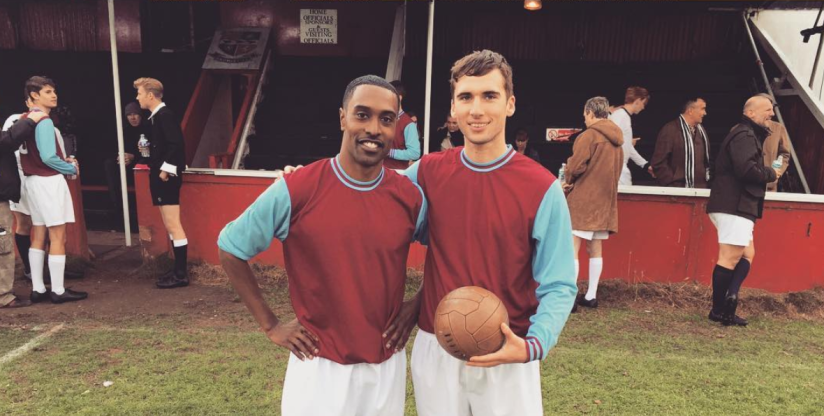 19 months later, having settled into my cinema seat at the world premiere of the Bromley Boys, I wished I hadn’t taken a backseat in the goal scenes.

Up to that point, all of the signs had been good. After the day’s filming, I was taken into the director’s caravan and given £100 for my troubles. Did that make me a semi-professional actor? I was sure it did and spent the evening working out how to get it into my Twitter bio.

A month before the premiere, I was thrilled to spot myself in the trailer. Ok, I was only in the background for half a second, but I figured that meant I’d definitely be in the film.

On the day of the premiere, Mum and Dad travelled down from Peterborough. They’d never been to a premiere before and weren’t about to pass up the chance to see their boy in a film.

They got there early, and when I arrived an hour before the start time with my girlfriend I was surprised. I hadn’t expected it to be such a big event. There were people everywhere. The bar was buzzing. The stars were mingling with the crowd. And when Mum spotted Martine McCutcheon I thought she was going to faint with excitement.

We walked through to the cinema room and found 1,000 seats awaiting us. All had been sold.

The film started and within 10 minutes I’d made an appearance. Pride filled me as I watched myself walk off the bus in my period outfit and stand majestically next to the door. The camera showed me in the background for at least five seconds as Branock O’Connor asked the West Ham manager whether ‘anyone good’ was going to be playing in the game. Cheeky sod.

Then, the run out scene. Now I really was in the background. All of those takes had been discarded. As the camera focused on Bromley’s rag-tag team, us West Ham players could just about be made out running on to the pitch. You couldn’t even tell that I was doing kick-ups. But not to worry, for now was my real star moment. The pass. I was sure it’d win me an Oscar.

I watched on, and on, and on. Awaiting the pass that never came. Instead the camera showed Sean Sinclair majestically control a lofted pass before turning and dribbling past the entire Bromley team. His goal was shown, then another of his goals, then a different actor’s goal. And then the scene was over, and with that my involvement in the film. £100 of payment for 10 hours of standing around and five seconds of peripheral screen time. To be honest, I was buzzing.

My girlfriend soon brought me back to Earth. ‘When are you in the film?’ she asked.

I reckon she was just too invested in the storyline to spot me. I don’t blame her. The film was good. Having spent a number of years playing non-league football, the characterisation was absolutely spot on. Dave Roberts’ book is brilliant, and the film truly does it justice thanks to some great acting, especially by Jamie Foreman.

As the end credits rolled, the crowd stood up to applaud. So many people had played a small part in bringing the film to life. I was proud to have been one of those people. And now it was out there, ready to be judged by the public. I guess the next step is just to wait for that Oscar…