If you haven’t noticed by now, I’ve spent the last few years trying to make my name as an author. Though I’ve had four books published, I still very much consider writing to be a side project at best. So when I was invited to talk at my first ever book festival, I jumped at the chance.

Here was my start on the road to becoming a well-known author. That’s what I was convinced of. There was even a small fee involved. Not only would it cover my expenses, it even left me with a bit extra. And it gave me the chance to sell my book to an estimated 1,200 pupils.

Without the luxury of a car, I crammed as many books as I could fit into a bag. 70 copies later I headed to the train station, my arms feeling like they were about to fall off with every step.

The Bowley Bookfest was taking place in Whalley, near Blackburn. Door-to-door it was four hours. After a tube, three trains and a car journey, I arrived at 11pm to a warm welcome and a plate of lasagne from the festival organiser, Victoria Gow. There were two other authors staying overnight, Mimi Thebo and Paul Cookson. They’ve both sold hundreds of thousands of books in their careers. I’ve sold slightly fewer. Still, it was a great chance to learn from two pros, and I made sure to take on board all of the advice they were only too willing to give me. 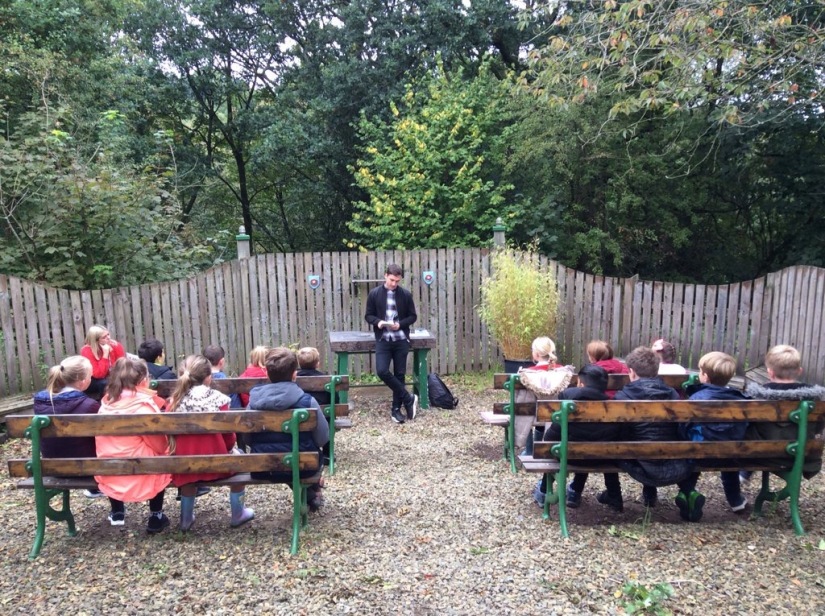 I soon found out there’s nothing glamorous about being an author on tour. There’s no tour bus, no groupies, and certainly no luxury accommodation. My room for the night, usually used by scouts, was just as basic as Victoria had warned me. Still, I had a whole room to myself. I even got to choose which of the two bunk beds I could sleep in.

My first session was scheduled for 9:15am. The school I was supposed to be presenting to didn’t show up. Next up I had a meet the author session. Nobody showed up. My pride suitably bruised, I held on for 15 minutes before deciding to head to the main hall to watch the festival’s star name, Chris Riddell, instead.

A crowd of well over 100 was hanging on his every word. An illustrator by trade, Chris drew as he spoke, a projector showing his every move. There was never a time when fewer than 20 hands were raised in the hope of being able to ask a question. As I watched on I realised that this was the standard I had to get to. He was a class act.

But I could only stay for ten minutes, because out of the corner of my eye I could see people – actual people – making their way to my area. Finally, my first group had arrived! I scuttled after them. ‘Are you Seth?’ their teacher asked with more than a hint of uncertainty. I managed to convince her, and two minutes later I was doing the talk I’d spent the previous evening preparing. A bit on aspirations, a bit on resilience, a bit on Brazil, a bit on writing, a reading from No Final Whistle, a Q&A, then a penalty shoot out to finish. It went well. Not Chris Riddell well, but well enough for nobody to heckle me. I even managed to get my first book sale of the day. 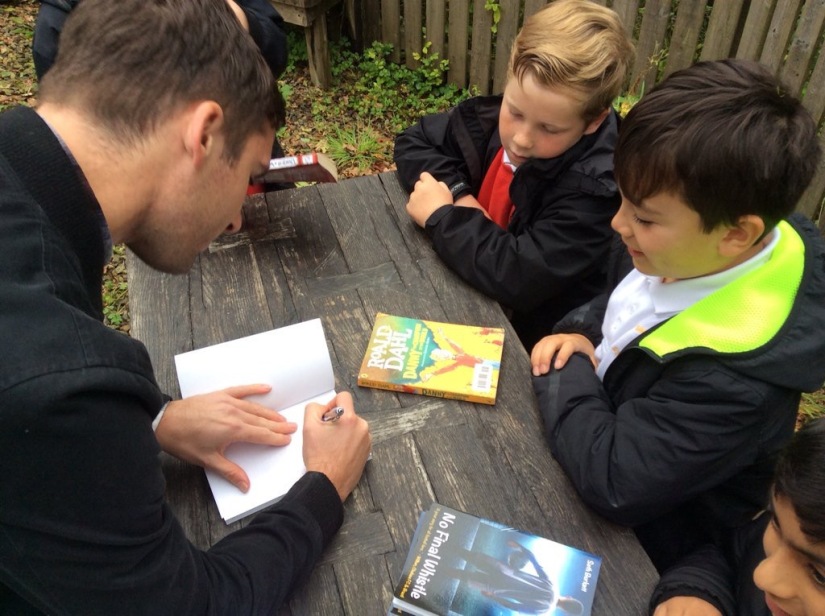 Then another group showed up. And another. Six of them, back to back. By the end of the day I was shattered yet buzzing at how things had turned out. The pupils had been brilliant, eager and willing. The sessions had gone well. I’d still only sold the one book but that didn’t matter too much. There was a book sale going on in the main hall where the majority of purchases would be taking place.

I soon received my next reality check. I’d sold another seven books in the main hall. Seven. To 1,200 pupils and a fair few teachers. In contrast, Chris Riddell had at least 100 people queuing to get their books signed. After the strength of his talk, I don’t blame them.

Another four hour journey home – this time carrying a mere 62 books in my bag – took my total effort to eight hours of travelling time to sell eight books. Had it been worth it?

The whole experience proved invaluable. I was able to learn from, and network with, some of the industry’s top writers. I met hundreds of keen pupils and tens of inspiring teachers. And, most importantly, it helped get my name out there.

In the days after the festival, I received two bookings from schools. I had contact from enthusiastic readers. The power of appearing at physical events became clear. It’s not about the sales. It’s always nice to sell books, but that’s not important. Making connections, learning from the best, that’s what is most beneficial for me at this stage.

If I keep on appearing at events, speaking to people and making connections, then maybe one day I’ll look back and laugh at the time I lugged 70 books up to Lancashire and only sold eight. After all, everyone’s got to start somewhere…

Thank you to Victoria Gow and the We Are Reading team for hosting an excellent event and providing such a warm welcome.